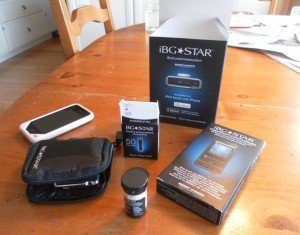 I’m very fortunate – and geekishly thrilled!
to be the first U.S. diabetic to review the new iBGStar, glucose meter and logging app for the iPhone and iPod Touch. Yup, it’s that meter that plugs right into an iPhone!

Testing Out the iBGStar.  I happen to have a longstanding relationship with the folks at AgaMatrix, the innovative company that designed iBGStar for Sanofi-Aventis. The AgaMatrix guys have followed my push for iPhone-ish diabetes devices from day one. And now that they’ve actually created the first-ever medical device that actually physically plugs into Apple’s platform, they’ve been kind enough to get me a test unit to play with.

First impressions: it’s simply amazing that this tiny little stick, about 3 inches long and 3/4-inch wide, can test your sugar either on its own, or plugged into your phone, in which case the results are automatically logged in the app, of course. If you use it disconnected from the phone, then the data is simply loaded in next time you do connect. 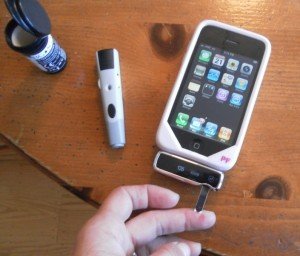 What a strange feeling — it’s like not having a glucose meter at all, since for once, you don’t have to schlep around a separate device that’s essentially the same size as your phone. And the app, similar to AgaMatrix’s current Diabetes Manager logging app for the iPhone, is just as slick and pretty and easy-click as any iPhone app could be. Only the iBGStar app is even more fun, with extras like a choice of wallpaper backgrounds to choose from: Beach, Mountain, Desert, Cityscape or Farm — whatever makes you happy when it’s time do the ‘ol finger prick trick. 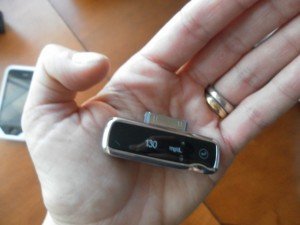 I’ve actually been exchanging notes with reader Matt Fishburn, a type 1 expat living in the Netherlands, who got the iBGStar just a week or so ago when the product hit that country (second roll-out after Germany). Matt’s originally from Iowa, and is “a relatively new member to club D, having been diagnosed just 10 months ago with type one, 2 days after my 26th birthday.” Yikes! He’s a self-described “technophile” and PhD student in electrical engineering.

“There are still some rough edges, but overall it makes tracking blood glucose, carbs and insulin much easier than with my Bayer Contour,” Matt writes. “The integration of the carb count and insulin amount with the glucose reading has made a big difference how often I track. I am lazy, and really hate copying information to multiple places. For example, if you test a few hours after a light hypo and you are higher than you expected, you can tag the high with ‘After a hypo.’ The phrases can be customized, which has been very useful for me. ‘Stress from PhD research’ seems to be showing up a lot in my readings. The app also makes it really easy to e-mail these numbers to your doctor or nurse, or transfer the numbers to a computer.”

“The meter itself is simple, small and straight-forward to use. However … I do not like the lancer that comes with the meter, as I find it difficult to change the lancets. I also do not like the test strips. The plastic top of a Bayer strip overhangs the bottom just a little bit, making it easy to apply blood, whereas the iBGStar strip lacks the vertical overhang. Even after using the iBGStar strips for a week, it is more difficult for me to apply blood to the strip than to a Bayer strip.”

“During a test my blood doesn’t seem to completely cover the visible window in an iBGStar strip, leaving me nervous about the meter results. A problem I’ve had with my Contour is incorrect readings without meter errors when the blood doesn’t completely fill up the strip’s slot. I haven’t had any issues with the iBGStar in the week or so I’ve been using it, but I’m still paranoid every time I test if the visible window isn’t completely filled.”

As exciting as it is to have this next-generation phone-based meter with a tightly integrated, complex tracking app, newbie Matt hit the nail on the head of patient frustrations, IMHO, when he added:

“You track all this data and the app does… absolutely nothing but present it back to you. To figure out what is causing all those hypos or hypers, you must look at the data yourself or have someone help you.” Bingo, Matt! I believe the Next Big Thing after iPhone integration has got to be smart algorithms that can flag trends and give us some recommendations about how to address them!

Matt also laments: “The inability to add free-form text to carb counts without creating a new tag is also very frustrating to me — I want to be able to tag the carb count with what I ate, but I haven’t found a good way to do this with the app. I also want to be able to search my past meals, so when I’m having a strange meal I could see if I’ve eaten something similar and don’t have to guess as much with my bolus amount.”

I hear you, Matt, but at the same time, for me personally, feeling compelled to type a bunch of text into my iPhone-based meter would kind of defeat the purpose, which is of course SIMPLICITY — making my life with diabetes easier, more streamlined, and less strewn with multiple gadgets that require my attention.

Here’s where the iBGStar is going to score huge points with patients, I believe. It’s small; it’s easy to use; it looks really cool; the app is more sophisticated than most, yet very intuitive; and it’s integrated with your cell phone, for God’s sake! It’s everything we’ve been waiting for! Now we just have to wait a little longer… on the gosh-darned FDA.

Original article can be found here.