The 27lb cat and his story of Diabetes

Home/The 27lb cat and his story of Diabetes

The 27lb cat and his story of Diabetes

By The Diabetic Friend|Diabetic Pets, Stories From Friends|

A personal story of love and dedication
By Christi Henderson Colman 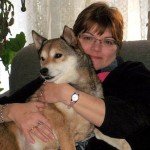 Every time I see any information about diabetes, I always think of Max, because he is where I had all my experience with the disease.

The 27lb cat and his story of Diabetes.  Max was a very sweet cat and a diabetic. We adopted him from the Kennebunk Shelter in the State of Maine when he was 5 years old. He was a huge white cat and weighed about 27 pounds! Max didn’t show signs of diabetes at first.  Time, however was not on his side.

A couple years later he started drinking excessive amounts of water and urinated in inappropriate places around the house. We brought him to the vet where he was diagnosed with diabetes. It took the doctors months and months of blood glucose curves to get his insulin levels correct.  I had to give him two insulin shots a day and feed him a special diet.  Max was doing just grand!

Two or three years later Max was diagnosed with cancer; was operated on and was fine for a few more years.  One tough cat!

My husband, myself and my daughter who was quite young at the time, knew how to give Max his shots in case one of us wasn’t home for some reason at the the scheduled time of his insulin.  I remember within the first year with Max, my husband and I had to get a bigger bed. Max always liked to come up and sleep right between us and since he was so big, he took up a lot of room. We joke to this day that we got a queen-sized bed because the double bed was too small for the three of us! Later on in life, Max used to sleep next to me with his head on the pillow next to mine,  just as a person would do. On occasion he also  liked to sleep on his back when taking a nap during the day. We had never seen a cat do that before.

About a year or so after we moved to NY, I discovered a lump under his leg; the cancer had returned.  Max underwent surgery once again, unfortunately, the cancer returned  within six months. 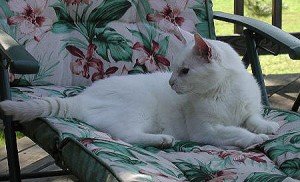 Max, a slimmed down 17lbs, insulin regulated and happy!

I loved that cat so much, and yes, he was a lot of care and effort. It was kind of like having a small child. We weren’t able to just travel and leave him behind unless we could find someone to come in and give him his shots, but he was the sweetest cat I’ve ever had and I treasured every minute I had with him. He was definitely “Mama’s Boy”.  He was so good about getting the insulin shots, too!  So easy that as soon as I went to the refrigerator to get his insulin, he would lie down at my feet so I could give him his medication!

Max loved socks! Especially dirty socks. He would hunt them down in the laundry basket and would pick them up in his mouth and meow and howl at them for a few minutes, then just leave them wherever he dropped them and go find more. Every morning, I would go through the house and pick up at least three or four socks he had pulled out in the middle of the night. If Max had a sock, you stayed away from him, because he got kind of weird if you tried to take it away from him.  Then and when he was at the vet was the only time he wasn’t a sweet boy!

Once Max lost so much weight from having cancer, the vet advised me to buy a blood glucose meter so that I was able to take his blood samples at home and then regulate the amount of insulin accordingly; with the vet’s guidance. He would go periods of time;  a few weeks to a couple months where he didn’t need insulin at all. Then, his BG  would go back up again, and he would need the shots.

Apparently, cat’s systems are very sensitive and they need to be monitored very closely so that they are not given too much or too little insulin. Max wasn’t quite as happy about having blood samples taken as he was about getting his shots, but he still never gave me a hard time about it. I would get the blood samples from his ears, as apparently that is the best area to obtain a sample on a cat with the least amount of effort.

I guess the point of my story  is that Max had the odds stacked against him; diabetes and cancer, but with the proper care, he was able to live a relatively long and happy life.  He actually jumped up on the railing of our back porch for the first time the summer before he died. He looked so surprised as if he couldn’t figure out he had gotten up there! It was the first time he had ever been able to jump up so high as his weight always held him back.

When it comes to diabetes, be aware of the warning signs, especially if your cat or dog is overweight. Max was such a sweet and loving cat and I still miss him every day. He was well worth all the extra health care that we had to give to him for  his love and affection were a priceless gift to us every day. We were blessed to have him in our lives.

Max lived to  see his 15th birthday before we finally had to have him put down because he was suffering so much.

Christi Colman is married with a beautiful 22 year old daughter who is the light of her life. She moved to Western NY from Maine almost six years ago and loves it!  She  is also an animal  activist for pro-life.

“I’m a very compassionate caring person and believe in judging people for myself, not by what others may have to say about them. I tend to be fiercely loyal and protective of my friends and family. ” Love God above all else and love thy neighbor as thyself” – this is what I try to live my life by.”

If your pet has diabetes or you suspect that it does, promptly see your veterinarian.

More information can be found at: