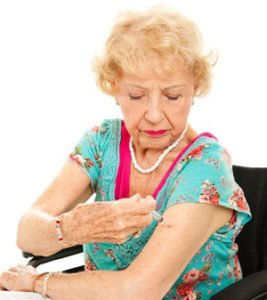 Geriatrics Arthritis and Diabetes. I write frequently when it comes to older folks with diabetes. Certain things become a problem when dealing with how to deal with this cursed disease.

When I was working as a Pharmacy  Technician  an older gentle came into the Pharmacy and was clueless on how to test his blood sugar levels.  He had the machine, however his hands seemed crippled with arthritis. The attending Pharmacist let me handle the problem as I am a Type 1 Diabetic.

The old man was scraggly, had scars over his face, probably from psoriasis, however he was a gentleman and very cordial and respectful in his requests.

He simply needed help with his diabetes.

He told me he was diagnosed as a type 1 diabetic and his doctor ordered him to test his blood sugar, write it down for his next visit. He was having trouble with this task,

Why?  The answer lies in caregivers, be it a nurse or a family member. My mother gave my stepfather shot after shot of insulin in his failing years.

My grandmother was diabetic but did it old school, using urine in a test tube, but did have to use a syringe to inject her insulin.

Back to my scraggly old friend at the Pharmacy.  He was desperate as he was told he had to check his blood sugar levels and was having problems doing it. I needed to find a solution to his problem. His hands shook almost uncontrollably.  He could not hold the device that would prick his finger. New thoughts were in order.

It was at this time that his daughter arrived at the pharmacy to find her father. I immediately called over the pharmacist for a consultation. He, with the approval of the patient and his daughter let me stand in.

As we all talked, the daughter became aware of her fathers desperate need to be able to check his blood sugar levels on a regular basis. Both the Pharmacist and I trained the young gal to be able to help her father to make sure his daily testing was done along with taking his appropriate doses of Humlog and Lantus.

She thanked us profusely as she claimed he was stubborn and would not ask for help from her or the family.

The end result is do not think you can go it alone when clearly it cannot be done. Arthritis and diabetes are both debilitating and can cause serious problems if not death in the long run.