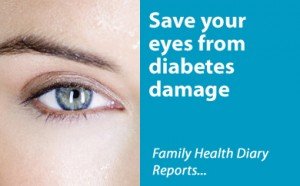 Vision impairment, including blindness, is a frequent complication of diabetes.

Diabetic Eye Care.  People with diabetes are four times more likely to become blind than those who do not have diabetes. Among people who are legally blind, 8% lost their vision because of diabetes. Each year, diabetes is the underlying cause of 12% of new blindness diagnoses. Among new diagnoses of type 2 diabetes, up to 21% show some degree of retinopathy, the main diabetes-related eye disease.

Retinopathy is an impairment of the retina — the nerve-rich, light-sensing area in the back of the eye that is crucial for sight. There’s bad news and good news about retinopathy. The bad news is that it’s very common: According to the American Diabetes Association, after 15 years of diabetes, 97% of people on insulin and 80% of people with type 2 diabetes show evidence of the condition (though not necessarily significant vision impairment). The good news is that tight control of blood glucose goes a long way toward preventing retinopathy.

Diabetes experts have known for years that as average blood glucose levels rise, so does risk of retinopathy. But the point was driven home forcefully in the 1993 Diabetes Control and Complications Trial. This 10-year study of more than 1,000 people with insulin-dependent diabetes showed that compared with those who practiced standard control of blood glucose, those who practiced tight control suffered 76% less eye damage.

Who’s most at risk for retinopathy?

In addition to poor glycemic control, other risk factors for retinopathy include:

Diagnosis at an early age: Retinopathy is to blame for most of the blindness in people with type 1 insulin-dependent diabetes. Almost half of those with type 1 diabetes are age 20 and younger.

Gender: Compared with women, men are at increased risk.

Ethnicity: Compared with whites, Native Americans, African-Americans, and Latinos are at increased risk.

Diabetic kidney complications: Those with kidney disease double their risk of retinopathy.

How does the retina become impaired?

Retinopathy is caused by damage to the blood vessels that nourish the retinal nerves. Just as poorly controlled diabetes harms the major arteries, which causes heart disease and stroke, the disease also takes a major toll on the tiny blood vessels in the retina.

There are two types of retinopathy — nonproliferative (or background) and proliferative. In the former, which is less likely to cause blindness, the retinal blood vessel walls weaken, leaking fluid and other blood components into the eye. The typical result is chronically blurred vision.

What you can do to preserve your vision

Fortunately, retinopathy can be prevented and controlled.

Get an eye exam every year. By peering into the eye with special instruments, your doctor can detect incipient retinopathy before you notice any vision impairment. If you have any detectable retinopathy, it’s a message to practice tighter control, reduce your blood pressure, and perhaps reconsider your exercise regimen.

Consider surgery. Ophthalmologists can treat retinopathy using a laser surgical procedure called photocoagulation. Brief, intense bursts of laser light can repair leaking blood vessels, destroy those that can’t be fixed, and prevent new ones from forming. Another surgical procedure, vitrectomy, can also be used if the retina has bled a great deal or become detached.

Diabetes also increases the risk of cataracts, caused by clouding of the lens of the eye, and glaucoma, caused by an increase in fluid pressure within the eye that damages the optic nerve. In nondiabetic adults, fewer than 1% have glaucoma and 3% have cataracts. Among people with diabetes, the figures are 7% and 22% respectively.

These conditions cause much of the vision impairment in people diagnosed with type 2 diabetes who are older than age 30. Risk of both cataracts and glaucoma increases with age. These conditions are another reason you should have annual eye exams. If cataracts become severe, the eye lens can be replaced with an artificial lens. If glaucoma develops, it can be treated with medications that reduce the fluid pressure in the eye. Diabetic Eye Care is essential.