By The Diabetic Friend|Diabetes Articles, Veterans and Diabetes| 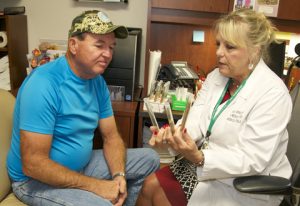 Changing Diabetes Care for Veterans. To hear the Veterans Administration (VA) tell it, they’re the global leader in diabetes care.

Uh… wait a minute… is this the same VA that’s been the lightning rod for the ire of American veterans for generations?

Yep. It’s the same VA, but today’s VA is a far cry from the one your grandfather went to. They’ve now got a cutting-edge diabetes playbook that’s proving itself with real-world results that are outpacing the rest of American healthcare. The organizations that represent vets are happy, and so too, it seems, are the vets themselves.

Changing Diabetes Care for Veterans has become the new face of the VA by creating  the community clinic; 1,400 of them, so far. Following a major revamping between 1995 and 2000, the VA changed its focus to “universal primary care.” It’s paying attention to a wide variety of health conditions, and has been an early adopter of electronic medical records (EMR), which many other clinics and hospitals have struggled to implement.

Why the VA Cares About Diabetes

And you think your family is big? The VA provides health benefits to 1.45 million vets who have diabetes. This number has risen sharply over the last decade, more than doubling since the year 2000. That means the VA is responsible for the healthcare of around 6% of Persons With Diabetes (PWDs) in the United States — more than their fair share. The prevalence of diabetes amongst vets far outstrips that of the general public. Nearly 25% of veterans in the VA healthcare system have diabetes, compared to about 8.3% of the general public.

The vast majority of vets with diabetes are type 2s. What about type 1s? While specific numbers aren’t available, the VA says its number of vets with type 1 is “very low” since type 1 historically develops at a young age and generally precludes military service — at least historically. Most of the VA’s PWDs are also men. While women now make up about 14% of active duty personnel, they make up a smaller percentage of the veteran population. They also tend to “under-utilize” the VA healthcare system. Only about 5% of all VA visits of any kind are by women vets (a subject of much ongoing research at the VA).

But it isn’t just the number of PWDs that’s high. So, too, is the price tag for their care. Diabetes is expensive for the VA. Inpatient and outpatient costs of vets with diabetes eats up 4% of the VA’s overall healthcare budget and 28% of its pharmacy budget. The VA shells out well over one-and-a-half billion dollars each year to care for vets with diabetes.

So are they trying to cut corners to save a buck today? Or are they taking the long view that they have these patients for life, and that good care today pays dividends in the future?

The VA’s clinical practice guidelines for diabetes call for blood sugar control through “diet, exercise, medication, and patient education.” Rather than adopting fixed A1C targets like other diabetes guidelines in the U,S, historically have, the VA calls for an individualized A1C target between 7 and 9, taking into account the patient’s age, health, and likely lifespan. It’s interesting to note that the American Diabetes Association (ADA) will adopt a similar approach this summer.

Of course, like other diabetes guidelines, control of blood pressure and lipids is emphasized, as are recommendations for foot checks, flu shots, kidney checks, and all the rest of it that we are used to seeing.

Like most other health plans, the VA’s listed medications start cheap and get more expensive as you work your way up the food chain. At the top, you have modern alternatives like GLP and DDP therapies.

Of note, however, is the fact that the VA dragged its feet for years when it came to adding modern basal insulin, like Lantus, to their formulary, not doing so until 2007, under pressure from Congress and veterans groups.

But on paper, overall, the current VA “battle plan” for diabetes appears excellent, progressive, and cutting-edge.

What’s Working in the Real World?

With all that money, and a pretty good playbook, how’s the VA actually doing? What do the health outcomes for vets look like, and how does that compare to the civilian population?

That all depends on how you view the numbers. The VA states that in 2009 most vets, about 85%, have “acceptable” blood sugar control. “Acceptable” is defined by the VA as having an A1C below 9%.

Is that good enough?

Well, whether it’s good enough or not, it’s a hell of a lot better than the civilians are doing. HEDIS data for the same year shows that about 28% of PWDs with commercial HMO insurance plans have A1Cs above 9. If you have a PPO, that percentage skyrockets to 44.6%. The numbers are about the same for Medicare. Medicaid recipients fare the worst, with fully 44.9% having A1Cs above 9%.

I think we all could be doing better, but clearly the VA is waaaaay ahead of the rest of the pack.

Jerry Manar is National Veterans Service deputy director for the Veterans of Foreign Wars (VFW), and a type 2 PWD himself. He tells the ‘Mine that the VFW complaint hotline gets hundreds of calls a month griping about the VA, but not about diabetes care. “We don’t get complaints hardly at all about diabetes,” says Manar. He also says he can’t recall anyone ever personally complaining to him at conventions or events about diabetes care or treatment. The VFW has around 2.2 million members, and according to Manar, “they’re not shy.”

If not diabetes, then what are they complaining about? Manar says most of the complaints called into the VFW hotline have to do with the wait time for specialty appointments, which can stretch to six months, especially in the under-staffed arena of mental health.

Manar himself gets his diabetes care at the VA and reports his last A1C was “a six-something” with daily BG fingersticks usually running in the 100-120 range. He says he occasionally waits 5-6 weeks for an appointment, but “my care has been exemplary.” He’s seen the same doctor semi-annually for the last 4-5 years, and his doc usually spends a full 30 minutes with him, much more time that his non-VA Primary Care Physician gives him. Additionally, he says he can order his diabetes meds on the internet, “which is really convenient.” (We know!)

Manar’s diabetes care is covered 100% as a service-related disability. Starting in 2001, the VA listed diabetes as a “presumptive” condition for in-country Vietnam vets. That means if your foot touched the soil in Vietnam between January 9, 1962 and May 7, 1975—and you’re later diagnosed with diabetes—the VA presumes that Agent Orange may have had a hand in it, based on the results of a National Academy of Sciences study that showed a higher than expected correlation between diabetes and dioxin exposure.

But even for vets not exposed to Agent Orange, diabetes treatment is still a covered benefit as part of overall healthcare. The main difference is that, unlike PWDs whose diabetes may have been caused by service-related exposure to dioxin, non-service related PWDs need to make medicine co-pays.

So PWD vets, what about you? Sound off! What’s your VA diabetes experience been like? Has the VA become the leader in diabetes care in your view? Or are they just another health plan talking themselves up? Do you feel their goal is to make you healthy and keep you that way, or just to save a buck?